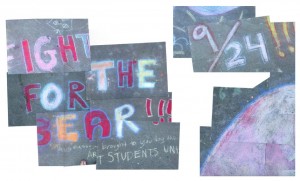 On the afternoon of September 24th, UC Berkeley history professor Heath Pearson gave his routine lecture on the history of economic thought to an emptier than usual room. The LeConte auditorium contained roughly 80 students of the 135 enrolled in the course, indicating an absence rate usually seen only the day before the University breaks for Thanksgiving. So where were all the students?

It is estimated that 4,000 UC Berkeley workers, faculty, graduate students and community members gathered around midday on Sproul Plaza to protest a variety of recent administrative decisions made in the wake of state-wide budget cuts. The campus wide “walkout” was part of a broader walkout movement by all ten UC campuses with the purpose of sending a strong message to University administrators and state legislators. The movement began when the University Professional and Technical Employees (UTPE) urged faculty and students to stay away from campus on the 24th, except to attend the various picket lines and rallies held throughout the day. The walkout, which was scheduled to coincide with the first day of instruction at eight out of the 10 UC campuses, came several weeks into Cal’s fall semester.

Students attending the eight UC campuses with the late September start date stood only to miss the largely superfluous first day of instruction and their professors had time to plan accordingly. At Cal, on the other hand, classes were held on a case by case basis, with the decision to hold class left to the professor.

Some, including Pearson, were forced to rearrange midterm dates just days before the event. Pearson made the decision to postpone a midterm scheduled for the day of the event, but told students that they were still accountable for material covered on that day.

“I wouldn’t call it fair but I would call it acceptable,” Pearson said. “People who walked out of class today are going to pay a price because they missed out on what I consider to be important course material, but it’s not the kind of price that says ‘Guess what, you just got a zero for 25% of the course,’ which I think would be really punitive for people who are following their conscience.”

Jing Jing, an undergraduate business student enrolled in Pearson’s class had to weigh her options before making a decision. “I support the cause,” Jing said. “I considered not going to class, but we have a midterm on Tuesday.” Others, like third-year student Theresa Diederich, felt that the event was important enough to justify her absence. “The class I’m missing is economic history [not Pearson’s course] and I think that this is history dealing very clearly with economics. Here’s a chance to participate in something that I’m learning about.” She said that her participation mostly had to do with a lack of transparency in the University’s financial decision-making.

Pearson’s decision to hold class was not meant as a political statement in opposition to the walkout. Rather, he endorses civil disobedience as an effective method of human progress and acknowledges the need for real financial reform at a University and statewide level. Pearson is doubtful, though, of the walkout. That is, he is skeptical whether progress can be made by actively walking out on the resources of the University in order to make a statement about needing more resources. He sees a danger in how the walkout might be perceived by California voters. “I just don’t think this is the right way to pursue the political agenda that they have,” Pearson said.

Reasons for attendance at the protest on Sproul were as varied as the participants. Canvassers took advantage of the crowds by distributing literature on causes ranging from feminism to communism. There were, however, common threads among the hundreds in attendance. UC President Yudof was the target of chants calling for his firing and his salary ($828,000 per year) was frequently cited on handouts and signs. “I know there are news teams everywhere. I just want to show everyone that we care, to show the President that we’re really pissed off,” said Jaffer Kattan, another third year in attendance, referring to Yudof.

Widespread anger flared up among students, staff and faculty in July, following the UC Regents decision to slash $813 million from the $3 billion the University gets from the state each year. The Board of Regents, in conjunction with Yudof, voted to cut pay almost across the board and to require additional furlough days for workers and faculty, seeing that it would be preferable to massive lay-offs.

While Yudof was a primary target during the rallies, he claims that he is not the true culprit. “This is a long-term secular trend across the entire country. Higher education is being squeezed out. It’s systemic,” said Yudof in a New York Times interview that ran the day of the walkout.

State lawmakers, headed by the Democratic Senate President pro tem Darrell Steinberg and Democratic Speaker of the Assembly Karen Bass, cut $9 billion from education, including $2 billion from higher education, in an attempt to make up for the $26 billion shortfall caused by increasing costs and declining state revenues.

Diederich was one in attendance who did not rush to blame Yudof, saying, “I’m not proposing at this point that we should just cut it from the top [University administrators] automatically or that there shouldn’t be some sort of fee increases. Obviously everyone needs to feel this budget crisis, but I don’t think that there has been enough open discussion at this point about where that money needs to come from and how much actually needs to be cut to make these broad-sweeping and long-lasting decisions.”

In spite of inconveniences to class schedules, Berkeley’s campus protest was the largest of all of the UC campuses, reaffirming the city’s long-standing reputation as a bastion of political activism 45 years after the famous Free Speech Movement student protests. 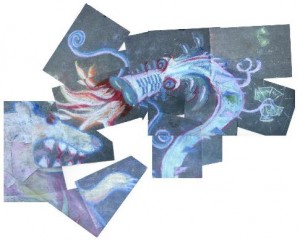