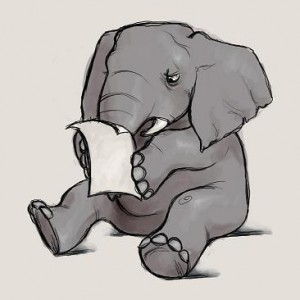 Something’s different with you. Barack Obama campaigned for “Change” last year, and it’s doubtless that you’ve done just that over the past few years. I don’t recognize you anymore, and I don’t really seem to understand what you’ve become and why. I’m upset that you don’t see what current ills you sometimes bring to the conservative movement, and how you could improve if you were just guided in the right direction.

Why do your representatives, senators, and governors continue to taint the party with inconsistencies and questionable ethics? You promote the sanctity of marriage, yet South Carolina governor Mark Sanford waltzes off to a woman in the southern hemisphere. You portray homosexuality as immoral, yet Idaho senator Larry Craig solicits a Minneapolis police officer for some airport bathroom fun. And you strive to attract excited young Republicans, since the party won’t survive without young blood; yet Florida representative Mark Foley sends sexually explicit texts to 14-year-old former pages.

I often open the New York Times and scan the Internet news headlines. Whenever I see an uncovered scandal involving a politician, as I look for the party affiliation, I hope, no, I pray, that it wasn’t a Republican. It too frequently is. Nevada senator John Ensign’s affair was the last one, right? But within a week, there was another scandal, with another Republican. Mark Sanford was just in the Appalachians taking some time off. Maybe his job was stressful, and the stimulus package had taken too much out of him. These are not excuses. True, Democrats have their scandals too; Spitzer and Edwards were atrocious. But our own hypocrisy won’t lead us to power.

Interrupting a major presidential address isn’t the way to gain support either. Yes, Joe Wilson was inappropriate. Wilson’s outburst interrupting the president’s speech has no place in a serious deliberation about a critical issue. His break of decorum highlights his own character, not his grievances; he not only angers the electorate, but also casts doubt onto the character of the entire party. Expressing discontent is better manifested through some other means.

It is true; Jimmy Carter and the House used poor judgment in tying in racism and formally condemning Wilson, respectively. But if we don’t look at ourselves, then we miss the point entirely. We lost power because we became unpopular. And we certainly will remain powerless if we become more so. Winning back power will require far more than becoming the best alternative: it demands that we follow a consistent, principled ideology and take on the responsibility of a positive agenda rather than merely obstructing a worse one. It doesn’t mean the whole party needs to change ideology, but we need to find someone, some vibrant, young, excited Republican, who can become the new face of our movement. He or she can’t be involved in a scandal, hold views too far away from the center, or flip-flop. Neither can this new face speak to the entire nation via a State-of-the-Union response as if we were all in elementary school (Louisiana Gov. Bobby Jindal), or lack the common sense to say Ruth Bader Ginsburg’s death was imminently approaching (Sen. Jim Bunning of Kentucky), to list just one ridiculous Republican comment.

Give Paul Ryan of Wisconsin ten years. Give Tim Pawlenty of Minnesota five years. Heck, take Eric Cantor of Virginia now. But we need that new, fresh, young, moderate face. That means dropping the people commonly considered the face of the Republican Party. Sarah Palin is simply unelectable. She’s a young, excited politician, but she’s too far right-wing and has neither the intellectual nor philosophic credentials to gain political power. Other firebrands continue to destroy the very fabric that built up the party in the 1990s and early 2000s. How is Rush Limbaugh still preaching his hateful language as a public figure of the Republican Party? How is Dick Cheney still allowed to speak for the Party? It seems as if every time he opens his mouth, our poll ratings take a plunge. Palin, Limbaugh, and Cheney all have one attribute in common: they merely mark Republicans as undesirable.

GOP, you must admit times have changed, and by change in this sense, I mean permanent change. You must face reality. And one of the cornerstones of this permanent change involves science. You must stop campaigning against global warming. There is a consensus that global warming is both real and man-made, and a fight here will either lead to alienating mainstream voters or risking permanent environmental damage. Hopefully, a commitment to alternative energy will both enable us to stop warming and allow us to discontinue oil purchases from OPEC.

Just as you can’t campaign against science and expect to win, you can’t lead with religion. It can be one element of your campaign (Mike Huckabee), but you can’t carry yourself with it. Doing so merely concedes that your opponent has reason on his side. Any policy must be defensible on rational grounds, not because of the dictates of religion or intuition. You may want to review your push for creationism in public schools; our party is frequently ridiculed by our opponents over that debate with evolution. Religion has done a lot of good, but it cannot be the cornerstone of a political movement.

Moderation is key. Stick to the center, regain popularity, and then spend some political capital further right. You can’t run a campaign on the far-right just after you’ve emerged from the 43rd presidency with record disapproval levels. Which is why John McCain, the most centrist candidate, was a decent choice for your nominee last year. Palin was wrong, however. With a more sensible VP, like Pawlenty, Republicans could have attracted more moderate voters, without sacrificing the religious right, which is more compatible with McCain than Obama. To vote for Obama would have been out of the question, and to stay home in protest and let Obama win would have just been foolish.

The midterm elections are approaching, and now is the time to adapt yourself to the changing political scene. We have a chance. Americans are losing faith in Obamacare. Here’s your opportunity to shine. Come up with your own solution. Stop just obstructing Democrat proposals about any issue and then slouching back and remaining idle. Come up with alternatives. Tell the American people why they should put the conservative movement back in power. Give them more of a reason to support you.

I want to conclude this letter by advising you to ease your criticism of President Obama. Deep down at heart, you cannot want him to fail. If you did, you would be placing party before country, and that is unacceptable. Obama is still a brilliant man and a skilled politician. Politely disagree with his policies, argue your opposing beliefs on Capitol Hill and among the public, and hope that upcoming elections will bring about gains for conservatives. But please, do not hope Obama fails as a president; to do so is to hope America fails. My fellow Republicans, let’s emerge out of this recession stronger, fresher, and reformed, so that we may one day have a chance to lead in Washington again.