With California’s legislature chronically unable to balance the budget, the state has been financing itself largely through bond sales. Of course, the legislature’s poor fiscal policies and stifling economic regulations ensure that future generations will be unable to produce the wealth needed to repay these bonds, leaving California to pay off its debt in more debt. This economic reality has caused California’s credit rating to plummet as fewer private individuals are willing to accept California’s debt. Republicans in the legislature, responding to their constituents’ anger at the legislature’s incoherent policies, have proposed AB 1506, which would allow bondholders to use their bonds in place of cash when dealing with the government. While the bill is motivated by an honest desire to protect bondholders from the legislature’s capricious incompetence, it will come at a tremendous cost in terms of rule of law, government expansion, and further economic damage.

The bill should be opposed simply because it is illegal. The Constitution of the United States declares, in no uncertain terms, that “No State shall…coin Money; emit Bills of Credit…” The State of Missouri had once attempted to issue an interest-bearing certificate that could be used in payment of state taxes; this policy was struck down by the Supreme Court as an unconstitutional bill of credit. For California to do the exact same thing indicates our legislature’s ignorance of both the legal framework they should be intimately familiar with and the critical importance of rule of law in legal, social, and economic stability.

No doubt there are those who defend AB 1506, and other unconstitutional acts, by asserting that in a crisis environment we ought to do “what works” rather than “what’s legal”. This interpretation of a constitution as a “living document” in fact ensures that it is a dead document, a piece of paper outlining no principles, no objective standards, and no rights. This sort of “pragmatism”, far from doing what works, undermines everything that enables the system to work. Without objective standards in law, every action becomes arbitrary, and no one can rely on a stable, objective government. The government cannot protect rights when rights are a matter of convenience instead of a matter of principle. 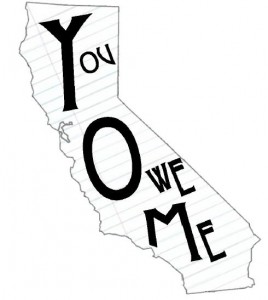 The political consequences of the bill are, however, far more than undermining “abstract” legal principles such as rule of law: this bill actively encourages the growth of the state, and its debt. When bonds can be used as payment, they become in effect money that bears interest. Every citizen would thus have an economic incentive to convert their cash into government bonds, propping up a fundamentally insolvent government. Not only would this exacerbate the state’s fundamental problem, debt financing, it would give the state a cash infusion that would allow it to enforce ever more regulations on our economy and our personal choices. Thus, a bill intended to ensure that bondholders can recover the money they put into the state treasury will in fact put the state in worse financial condition, all the while enabling it to become more intrusive in citizens’ daily lives.

There are considerable economic consequences as well. The aforementioned increase in regulations can only serve to further disrupt a fragile economy. The US has enough experience with economic bubbles causing great pain that we ought not to rush into another one. And since this would make bonds become more liquid – they could be converted to money more easily – the state will run into problems when its bond rating decreases. In such a case, citizens will be unwilling to hold bonds; some will be attempting to sell or use the bonds they hold, while others will refuse to buy bonds due to the increased risk. This means that the state will periodically have fiscal crises where many people try to redeem bonds and the state will be unable to issue replacements.

AB 1506 will do far more harm than good. If the legislature truly wishes to reduce debt, protect bondholders, and strengthen the economy, its only reasonable course of action is to cut taxes, regulations, and spending.