On 26 and 27 October 2009, the focus of the debate over abortion came to rest at UC Berkeley. In an unprecedented move, a monolithic display consisting of graphic images of aborted human fetuses was erected on Upper Sproul Plaza, the campus’ social and activist hub, as well as the Mecca of the Free Speech Movement. The exhibit, which was sponsored by Berkeley Students for Life (BSL), the campus’s pro-life student group, immediately provoked responses from students and non-students alike. The signs themselves belong to the Center for Bioethical Reform (CBR), which BSL had invited for these two days to help coordinate and staff the display, which has been in operation at over 100 college campuses over the past 11 years in both the US and Canada. This year’s event was the first time the display had ever come to Berkeley, and marked a milestone for both the campus and CBR.

This exhibit, known as the Genocide Awareness Project (GAP), puts images of aborted fetuses next to pictures of universally recognized forms of genocide, including victims of the Holocaust in Europe and of lynchings in the southern United States. At first, many people might call this comparison a stretch, while others would say it is downright offensive. Yet let us consider what the common justification for all these evils was and is: that the victim is somehow subhuman, or at least not on par with those deemed to be “persons.” The unborn child is not recognized as a human person, even though he or she is a biologically human entity with his or her own unique DNA. That child is not just human; he or she is a distinct person who just happens to be in the earliest stages of human development. But if we strip away that personhood, the victim is no longer human, and thus the act of destroying “it” is no longer immoral. Hitler and the Klan also considered their victims to be of unequal status relative to the “superior races”; their victims were thought of as being devoid of either personhood or humanity altogether. Furthermore, we ought to recognize that such a comparison could be deemed “offensive” only if one is under the impression that we are dehumanizing victims of genocide and trivializing that tragedy. On the contrary, we affirm not only their humanity, but the humanity of the unborn child. This recognition of this being’s humanity is precisely what makes abortion so tragic and so evil. 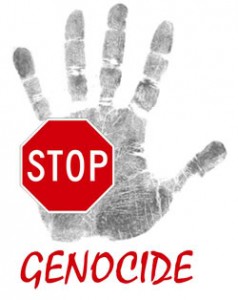 Abortion’s connection to genocide runs even deeper than that. Margaret Sanger, the founder of Planned Parenthood, wrote in a 1939 letter to Clarence Gamble, “We do not want word to go out that we want to exterminate the Negro population, if it ever occurs to any of their more rebellious members.” In the book, Pivot of Civilization, p. 187, Sanger is quoted as saying: “We are paying for and even submitting to the dictates of an ever- increasing, unceasingly spawning class of human beings who never should have been born at all.” Naturally, Sanger’s solution to the perceived problem of “Negro overpopulation” was to become active in the American Eugenics Society (AES) and to found her own organization (which at the time was called the American Birth Control League, later Planned Parenthood) by which she could subtly eliminate those who in her mind were undesirable. (From Maafa 21, a recently produced documentary about abortion and eugenics.) Furthermore, the writings of AES affiliates influenced Adolf Hitler himself to develop his own master plan to “purify” the human race. (From “The Horrifying American Roots of Nazi Eugenics,” by Edwin Black; an article from a historical project belonging to George Mason University.)

Today, Sanger’s goal of targeting racial minorities is still being realized. Black women are targeted the most by Planned Parenthood and other abortion providers (apx. 56% of all abortions in the US), with Hispanic women coming in second at apx. 32%, thereby accounting for 88% of all abortions in our country (Maafa 21). While these statistics differ from those currently available from the pro-abortion Alan Guttmacher Institute (AGI), Walter Hoye’s Issues 4 Life Foundation had discovered that AGI had actually published misleading statistics to try to hide the fact that abortion targets minorities at an extraordinary rate. (For this reason, AGI only provides a statistic that combines the total number of abortions from 1973 – the year of Roe v. Wade – to 2005.) How can we allow ourselves to believe that preventing the births of minority groups so disproportionately can be considered anything other than genocide, especially when you take the origins of Planned Parenthood into account? Abortion truly is America’s hidden genocide, and a legal one at that.
Though the genocide aspect of the display has been the same everywhere that the event has been held, the Berkeley exhibit differed from all other past installations. This year, both BSL and CBR were proud to debut new signs that put images of aborted fetuses next to images of President Barack Obama. Each of these signs was accompanied by a quote stated by Obama. These quotes were such that most people would agree with in principle, but they were highly ironic in light of the positions Obama has taken with respect to abortion. We sought to highlight Obama’s astonishingly duplicitous rhetoric, as well as to make his unbridled support of abortion known to those who may not have been aware of it. Those who follow right to life issues know that Obama is the most extreme pro-abortion president in our nation’s history, but his carefully crafted rhetoric makes many think that he is a moderate on the issue who is truly concerned with finding “common ground.” Some will say that this approach is inherently partisan; we hold that it is merely a straightforward analysis of President Obama’s own words. Those who were offended were probably upset by the fact that the man who is revered by so many in Berkeley has been exposed as a deceiver.
Despite the hotheaded reactions and a counter-protest consisting mostly of students from a women’s studies class (at the behest of their professor) and members of Berkeley National Organization for Women (BNOW), GAP staffers were pleased to have many enlightening conversations with countless students. The fact is, Berkeley is no longer the liberal bastion it is often believed to be. Today, it is a very apathetic campus, and it takes a large scale event to get people to talk about issues that matter. These curious students held all sorts of beliefs on abortion, from staunch pro-lifers to staunch abortion supporters, and many who were uncertain. Yet what was particularly pleasing was the fact that these students were very willing to engage in rational dialogue. Even some of the counter-protestors eventually engaged with us in a very respectful discussion, for which we are very grateful. Of course, most of them continued to demonstrate their unwillingness to engage in rational dialogue, preferring to resort to the shouting of slogans. (“My body, my choice!”). One young woman, rather than join the shouting, wore a sign reading “I had an abortion/It was GREAT!” showing utter disdain for human life. This revealed a great deal about the nature of the two sides: the pro-lifers always kept their calm, and were happy to debate rationally and civilly with people. 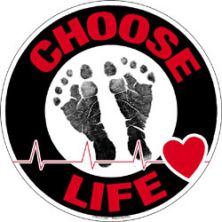 The counter-protestors were happy to scream themselves into a state of acute laryngitis. I think many people realized that most of the abortion advocates were not really interested in having meaningful discussion. They were there simply to make a scene, which actually worked in our favor, since many more students came our way as a result of the ideological clash. Ultimately, our primary objective was to change hearts and minds, because before the battle against abortion can be won in the courts and in legislatures, it must be won in the conscience of the people. We are confident that we took great strides toward that end as a result of the Genocide Awareness Project.