In a recently released study, the Department of Health and Human Services affirmed that the 45-year-old Head Start preschool program has no lasting effects on its students in all of 114 academic and non-academic tests. “These results make it clear that we need to build a more coordinated system of early care and education, and to focus on key improvements to teaching and learning in the early grades,” said US Secretary of Education Arne Duncan. In the wake of the report, HHS Secretary Sebelius called for greater funding and more federal control of both Head Start and elementary education, declaring that “research clearly shows that Head Start positively impacts the school readiness of low-income children.” Naturally, the only possible solution is to spend more money on it.

California State Senator Alan Lowenthal’s bill, SB 518, recently passed in the California legislature. The bill imposes programs on local governments which eliminate ordinances that require parking spaces in commercial lots. The bill is intended to support AB 32, which requires California to reduce its carbon dioxide emissions to 1990 levels by 2020. In the name of fighting global warming, the bill imposes state-mandated local programs, empowers the California Air Resources Board to assign “cap and trade” points or other measures, takes authority over money apportioned to cities or counties, and dictate local ordinances, all without State compensation. The bill has no provisions – other than harassment and micromanagement of drivers and taxpayers – to alleviate traffic congestion. 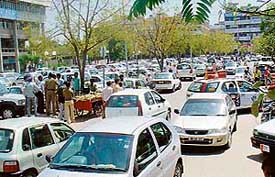 Responding to President Obama’s statements indicating that his administration will attempt to federalize education with the “Race to the Top” plan, Texas Governor Rick Perry stated, “I will say this very slow so they will understand it in Washington, DC: Texas will fight any attempt by the federal government to take over our school system.” Texas withdrew from the program “in the interest of preserving our state sovereignty over matters concerning education”, and because the federal government is “further interfering in state and local affairs and betraying their clear disdain for our rights.” According to Texas education officials, accepting the plan would cost over $3 billion in up-front costs and acceptance of as-yet-unwritten standards, likely inferior to those recently implemented by the Texas state legislature, for an uncertain one-time benefit of under $1 billion. Don’t mess with Texas.

4. By the Numbers: State of the Union Address Edition