In the Black Student Union’s March 1st “Blackout”, about 200 black students dressed in black and wore black cloths over their mouths and faces as they stood or sat in silence under Sather Gate. The point was supposedly to protest the alleged racism at UCSD in the aftermath of the “Compton Cookout” party there, as well as protest “institutionalized racism” at UCB. Unfortunately, rather than use the opportunity to discuss actual race issues that usually are never discussed and avoided at great lengths, the protesters instead protested their being ignored and their voices unheard by drawing attention to themselves and refusing to make their voices heard. As a result, the “Blackout” left unresolved actual questions about race issues, instead only serving the largely unrepresentative interests of the insufferable BSU.

We had thought the city council that brought us open condemnations of Marine recruiters as “uninvited and unwelcome intruders” would have stopped at that, but they recently issued a statement in support of the student protests of March 4. The city government not only tolerates, but endorses, higher taxes for its residents for no tangible benefit, reckless and lawless student behavior, and obstruction of public rights-of-way.

3. “They must’ve done something wrong… they are the police, after all”

The radical-left group BAMN (By Any Means Necessary), which stands for taxpayer support of illegal immigrants and affirmative action and against educational freedom appeared on Sproul Plaza seeking plaintiffs for a lawsuit against UCB, alleging police brutality against students who illegally barricaded themselves in Wheeler Hall last semester and who assaulted and swarmed the officers attempting to maintain order and arrest the trespassers. Perhaps BAMN didn’t consider that their credibility might be compromised just a tad by the fact that they had to advertise for “witnesses”. 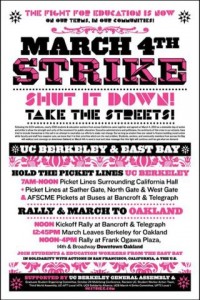 Students, community members, and basically anyone who could hold a sign collectively demonstrated their anger with the UC’s 32% fee increase on March 4th. And California’s 2/3 majority vote on the budget. And racism in the UC. And immigrant rights. And union workers’ rights. And “shutting [‘the system’] down”. And impeaching Obama.

Wait – what were they protesting again? Every cause and its illegitimate brother made it out to the March 4th protest here on the UC Berkeley campus, across other UC and CSU campuses, and of course, the capitol in Sacramento. Each cause was trying to demonstrate what the people are really upset about, ultimately drowning out the original point of the demonstration with total disregard of civil order. As usual, fire alarms were pulled, protesters with bullhorns stormed lectures, and picket lines illegally blocked students from passing to get to class.

Protesters further undermined the law when a large group of them went from standing on the sidewalk on Bancroft at Telegraph to spontaneously block the 3-way intersection, trapping cars and AC transit busses for several minutes, while a group of 150 rogue protesters blocked traffic on the I-880 freeway. Those who could have benefited most from attending class March 4th may very well have been the protesters themselves.