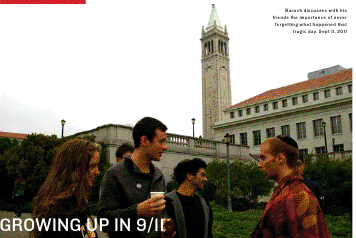 Our school normally sent us home on buses. But on that day, the administration could not assume that we still had parents. We were kept waiting in the assembly room for hours while they contacted our parents, one at a time, asking them to pick us up.

I remember 9/11 vividly. Most of my childhood was spent in the New Jersey suburbs a commute away from Manhattan. It was the start of my fifth grade year. After a long summer break, I was getting accustomed to school again. At the school I attended, the vast majority of the children had and have parents who work in the city.
The long hours I spent in the assembly room were some of the most traumatic in my life. I had no way of knowing if my father, who works in Manhattan, had been killed or not. Hundreds of other children shared that anxiety, contributing to a crazed atmosphere. The vast majority would continue to know family life as they had known it. A few of them, however, had gaping holes torn in the fabric of their existence.

My mother finally arrived to rescue us from what was the hellish torment of the assembly room. She informed us that our father was fine, which lifted a load off our young shoulders. During the car ride home my younger brother asked about the status of the Yankee game we were supposed to be attending that night, with the sweet naiveté only a child can possess. My mother informed him that it was cancelled. He was very upset, more upset than he had been all day. It was as though missing that Yankee game made the events of the day real, confirmed that he was not dreaming. We still have tickets to that Yankee game.

At home I watched the same television broadcast over and over again. The planes striking the towers. The towers coming down. Coming down on streets I had walked, coming down in the city of my birth. I did not get my homework done that night. For that I was punished the next day. My teacher, like so many others amongst us, simply could not come to grips with the magnitude of 9/11.

The country came together in the aftermath of 9/11. Petty rivalries were put aside, our common identity as Americans took precedence. At Yankee-Red Sox games in Boston’s Fenway Park, fans showed up with “I love New York” and “We love the Yankees” signs. Anyone with any knowledge of the Yankee-Red Sox rivalry can appreciate just how extraordinary that was. President Bush did a truly incredible job of uniting and inspiring the country in the dark days after September 11, evidenced by the fact that his approval ratings hit ninety percent. His bullhorn speech at Ground Zero, where he famously promised that “the people who knocked these towers down will hear all of us soon,” is not one I will ever forget.

Our nation was filled with righteous anger. For once there was a consensus; we were a nation at war. Entering the debate about the wisdom and propriety of the wars we have fought in the last ten years is beyond the purview of this article. But that we are engaged in a broader war against Islamic Extremism cannot be doubted. That war is being fought on too many fronts for all of them to be enumerated here. Terrorist acts, however, remains a favored tactic of our enemies.

Many terrorist plots have been broken up over the last ten years. Only one, at Fort Hood, was successful. We have been very fortunate, and must be cognizant of our good fortune. Vigilance will be required in order to ensure that the next ten years are not more sanguinary than the last ten have been. There are Islamic fundamentalists in our country plotting the murder of Americans every day; the death of Osama Bin Laden has not changed that.

On this, the tenth anniversary of 9/11, let us seek to come together as we did in the immediate aftermath of the attacks. Let us remember that, despite our differences in race, religion, political views, and much more, we are all Americans. What unites us is greater and more powerful than what divides us. ■