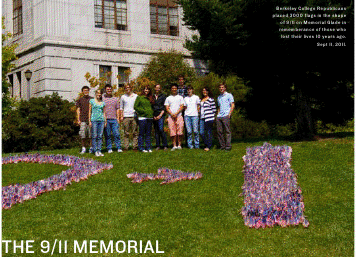 This month marked the 10th anniversary of the September 11, 2001 terrorist attacks on The United States. With few public remembrances scheduled on campus, The Patriot teamed up with the Berkeley College Republicans to make sure that the occasion would not be forgotten on campus. On the Thursday evening before the anniversary, club members stayed out until the wee hours of the morning tying yellow ribbons at various visible locations around campus. Then, on Sunday, September 11, members got up early to form the traditional 9/11 flag display on Memorial Day, where it stood for the rest of the day.

The memorials received much notice from members of the campus community. Cal Women’s Basketball coach Lindsay Gottlieb tweeted, “Yellow ribbons all over campus for 9/11 remembrance. Many friends, family, Americans affected that day.[…] I’ll never forget how the country rallied around NYC that day and the weeks that followed.”
Please enjoy this photo collage of September 11, 2011 at UC Berkeley. We will never forget. ■ 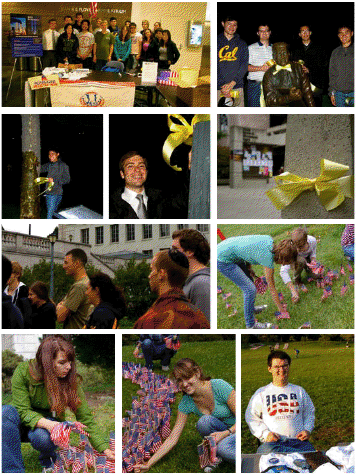