The Bake Sale: A Personal Story 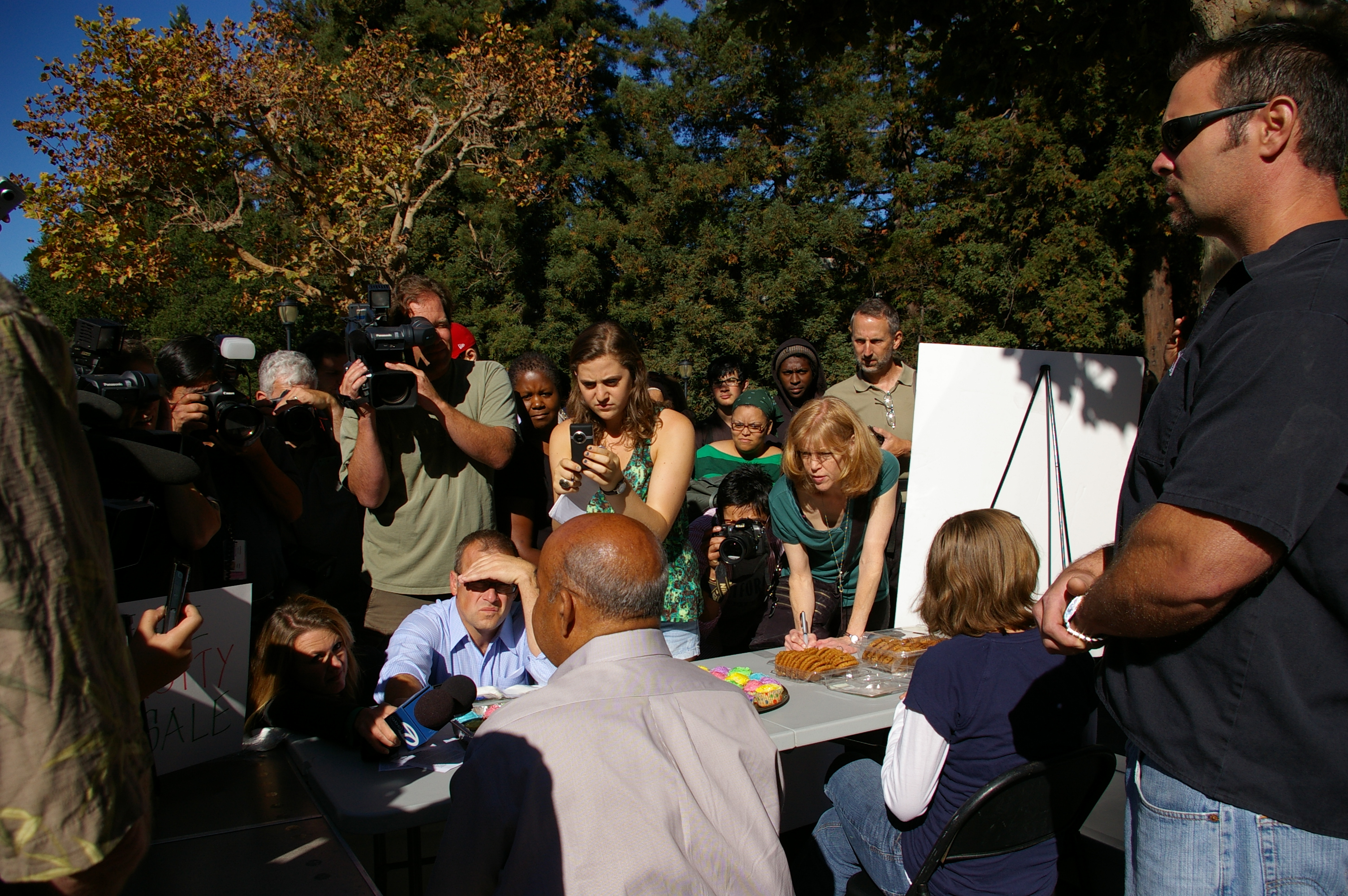 On September 19, 2011 at 11:28pm I wrote three words that would change my life and the lives of several other people for several weeks to come, and perhaps even longer. No, it wasn’t “I love you.” The three words were, “Bake sale anyone?”

The forum was an internal Berkeley College Republicans Executive Board Facebook group and the occasion was an ASUC sponsored phone bank the following week in favor of Senate Bill 185. Over the summer, a few members of the board had noticed this bill working through the legislature under the radar. At the same time, we were trying to think of some activism ideas for the upcoming school year. Remembering the affirmative action bake sales held at campuses around the nation (including Berkeley) in the early 2000s we thought we might do something similar for this bill, which would allow the University of California and California State University systems to once again consider race in admissions.  We briefly talked about the idea and agreed to consider it if the bill reached the governor’s desk.  We then forgot about it and didn’t bring it up again, even after the bill indeed was sent to the governor in early September.

That is until the ASUC decided to have their phone bank.  I received a Facebook invitation asking me to make phone calls on Sproul plaza the next Tuesday in support of the bill (no doubt the administrator of that event now regrets not filtering his invites).   This inspired me to post the aforementioned message on the BCR board Facebook group.  We then discussed the idea at our weekly board meeting the following night.  In a discussion that didn’t last more than five minutes, everyone in the room – including, by the way, multiple female and minority students – decided to support the event.  The only concern raised was that because affirmative action was such an old issue, it wouldn’t be timely. This was refuted by noting that the bill on the governor’s desk made the issue very timely, and so we moved forward.

At the time, we had no idea what we had just set into motion. Most of that board meeting was spent discussing not the bake sale, but BCR’s objection to an ASUC senate bill recognizing the “indirect” victims of 9/11, essentially condemning the wars in Iraq and Afghanistan as well as the Patriot Act.  If anything was going to get us attention that week, we thought it would be our attendance at the senate meeting to oppose that bill. As for the bake sale, we wanted to just distract people from the phone bank, get some nice photos for our scrapbook, and maybe (just maybe) get an article in the Daily Cal to raise awareness about SB 185. 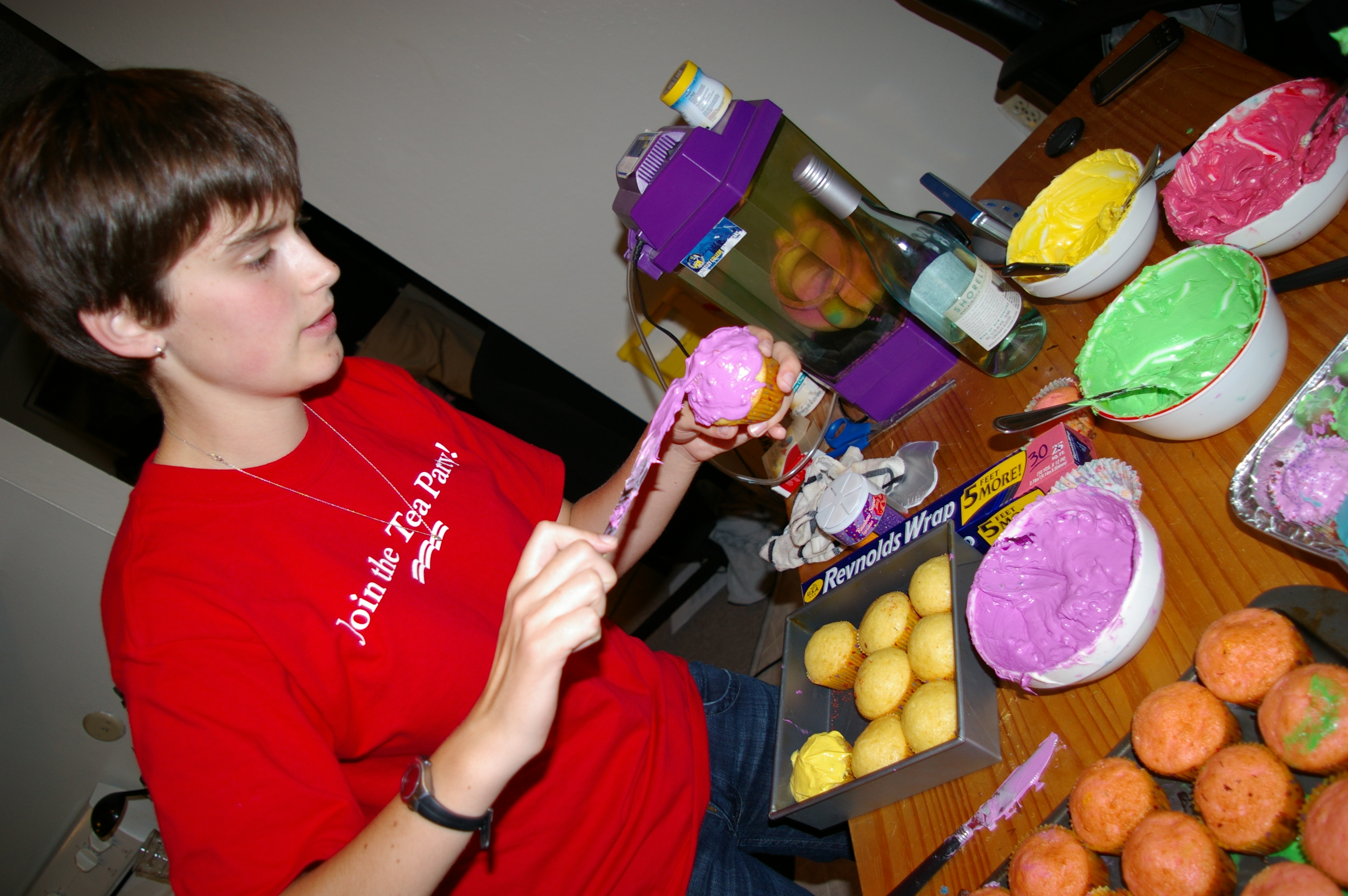 At our meeting that Thursday, we announced the event to our general membership. Again, it was a brief announcement; we didn’t even think it would be the biggest event of the week. At around the same time, our communications director posted the now infamous Facebook event page.  Thinking that we would have to work hard to create attention for the event, we went home and posted the event on our walls and invited all of our friends. Then we got ready to have a perfectly normal Thursday evening.

About an hour after the end of the meeting, we received promotion of the event from a very unexpected source, a former ‘progressive’ member of the ASUC Senate.  He also posted a link to the event page, but his tone was somewhat different than ours. “I’m sorry, this is not funny to me,” he wrote, “Berkeley College Republicans have you lost your minds?” From there, the hate snowball began. Individuals began to post negative comments on our event page wall (some of which you can see in throughout the pages of this issue). At first we tried to respond but the number of comments was so overwhelming we could not keep up. A short time later, our president Shawn Lewis made the call to just stop responding in the hopes that it would soon die down.

By about midnight, it was clear that was not going to happen. The event continued to be reposted by students and non-students alike. Reaction was nearly uniformly negative.  We decided to call an extraordinary conference call of the executive board at 1:30am.  In a call that lasted nearly two hours, we debated how to best address the situation.  Some board members argued that we should cancel the event while others said that we must forge ahead lest it look like we cowered under pressure. I have never heard such emotional conversation from my fellow board members.  We were genuinely concerned that we had made a huge mistake and that the club would be branded as racist. Ultimately, we compromised and decided that the event would go forward with a changed event description that better represented our message and clearly explained its satirical point.  We also made what would ultimately be a critical decision – we would respond to every media inquiry.  Whatever we thought of the event initially, the fact was that it was out in the public eye and we could either own it or hide and leave ourselves to the mercy of the media.  I finally went to sleep around 4:30; it was a very uneasy rest. 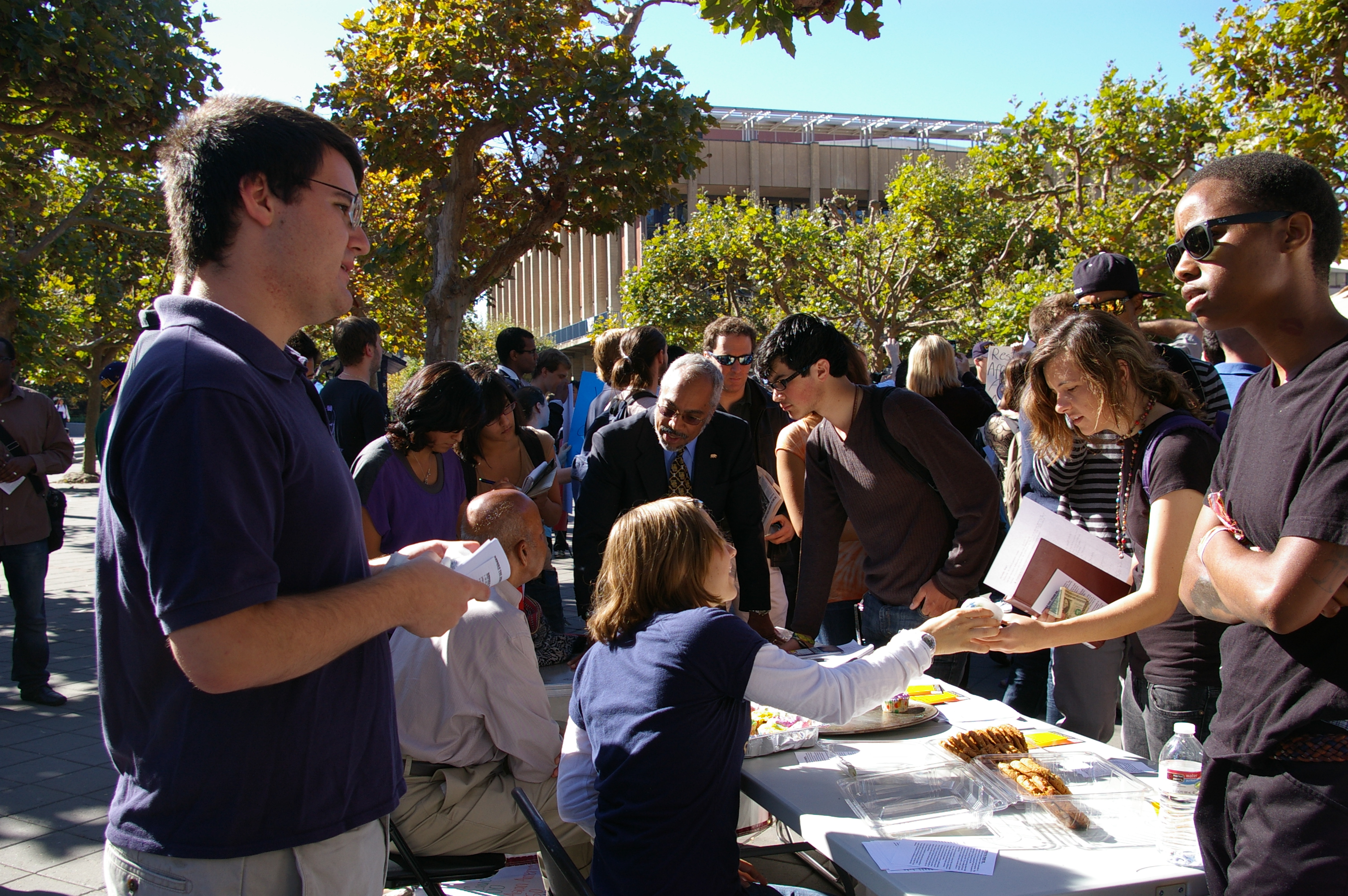 The next morning I woke up to a number of text and Facebook messages from people I consider friends questioning the event. Most didn’t agree with us, some quite pointedly. I silently wept. I have spent several years building a reputation as a republican who could get along and be respected by those with differing views.  I thought I had managed to throw that away in about twelve hours.

I then left for a prescheduled trip back home to Sacramento to visit my family.  On the ride there, I received word that The Daily Cal had published a story on the bake sale, the first of hundreds. Shortly thereafter I heard ABC 7 had called and was interviewing Shawn. At that point, I knew this was going to be a big deal.  For the sake of not alarming my family, however, I tried to go about my normal life as well as possible. I told them about the bake sale, but only casually.

After a weekend of advising and keeping updated from afar, I knew it was time to head back to Berkeley on Sunday morning. Shawn had just been on CNN twice in twelve hours. He asked me to return for a special ASUC Senate meeting since I was the person who knew the most about the ASUC.  I knew he was right, so I reluctantly packed my bags and headed back to Berkeley a day early.  On the train ride back, I overheard two people talking about the bake sale.

The Senate meeting turned out to be a turning point in public reaction to the bake sale. Supporters of BCR came out in force while our opponents were few and off message. An African American woman, Marilyn Singleton, approached the podium and was immediately given snaps (Berkeley’s version of applause) by the other side on the assumption she would support Affirmative Action. She didn’t. She was there to defend the bake sale. After her speech, you could have heard a pen drop in the meeting. While the Senate passed its predetermined resolution condemning the bake sale, although not by name, the media coverage that night made it clear we had won.

The next 36 hours or so before the bake sale were hectic ones. Because Shawn was inundated with interview requests, myself and other board members began to handle some of them. I appeared on KGO’s Ronn Owens Show, KQED Forum, Larry Elder, The Armstrong and Getty Show, and a number of other programs (the last of which is the most listened to talk show in Sacramento, which made me a virtual celebrity back home. Even my dentist called to congratulate me – and remind me to brush and floss).  I also managed to write a paper that was due the next day. I got a B, very good under the circumstances.

The bake sale itself was a whirlwind of activity; I don’t actually remember that much of it.  I gave nonstop interviews for the first two hours of the event with everyone from the CSU East Bay newspaper to Reuters, basically saying the same thing over and over again.  I also had a lot of discussions with people who disagreed, some civil and some not so civil but none violent. At one point I looked up and noticed helicopters hovering. Never in a million years had I anticipated that a bake sale would merit OJ Simpson like chopper coverage.  CNN broadcast portions of the event live, as did every major television station in the Bay Area. That night, it was the third story on ABC’s World News, following a story about missing Libyan missiles. It was the most incredible event I had ever been a part of. 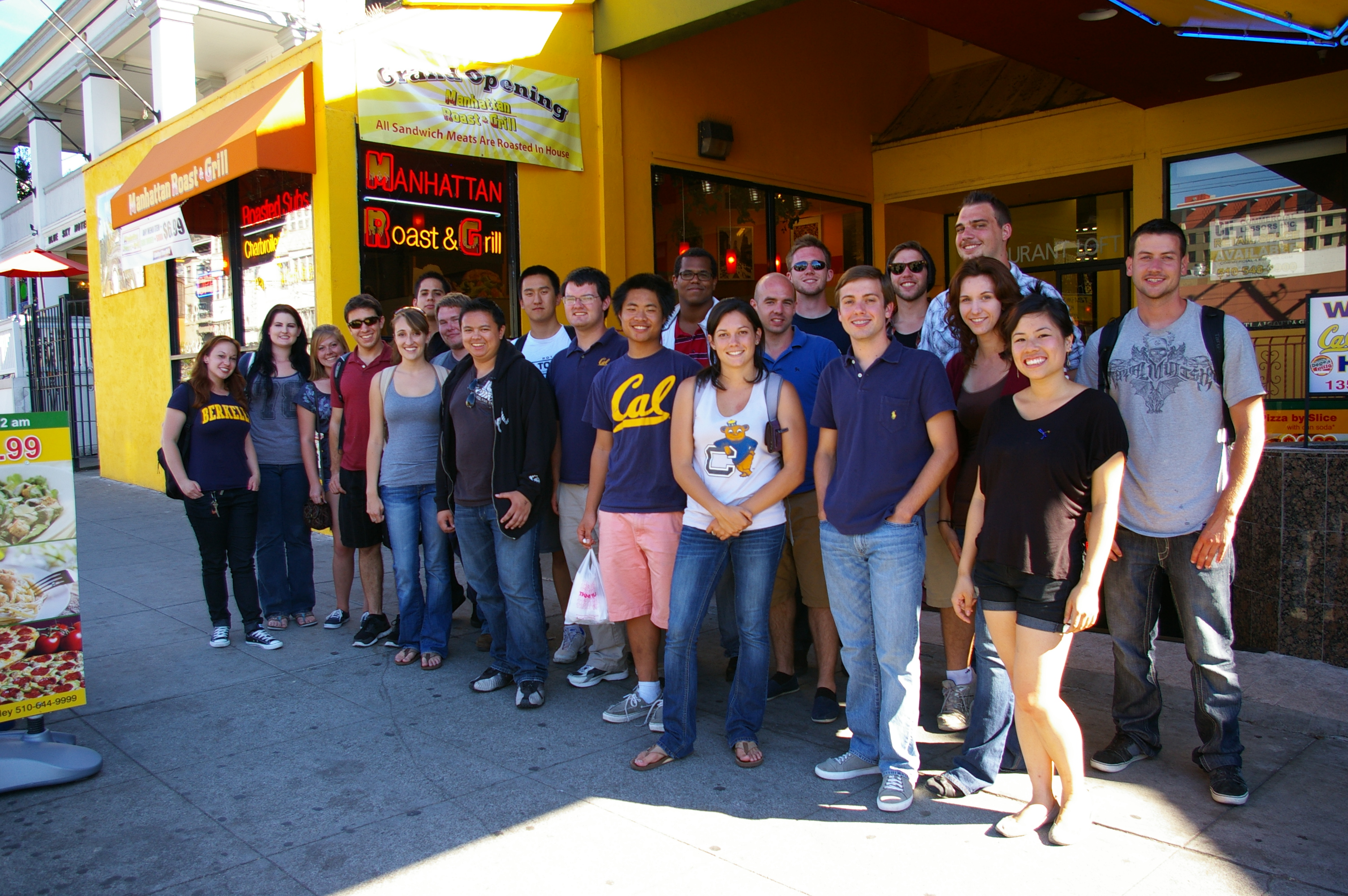 Within a couple of days, life got back to some sense of normalcy. Wednesday afternoon, I attended my first class in six days. I caught up on all the other things in my life that I had neglected for a week. By the weekend, things were relatively back to normal, though with significantly more life experience than before. Friends who had at first misunderstood the purpose of the event and sent me those messages the first night at least understood what we were trying to do and that even if the event was intentionally racist, we were not. Some even came to support our message.

On October 8, Governor Brown vetoed SB 185. We might never know whether the bake sale played a part in his decision, but one thing is for certain – our event brought to light the extent of public opposition to using race in admissions. In a poll that never would have been taken if not for the bake sale, Survey USA found 77 percent of Californians – across all age, ethnic, and gender groups – opposed the bill.  All Berkeley College Republicans can hold their heads high and recognize that the decision to go forward with such a controversial event impacted the course of this issue. If it wasn’t clear before, it is now – race based preferences are a thing of the past in California public universities.

2 thoughts on “The Bake Sale: A Personal Story”