In light of the treatment of the University of California’s new president Janet Napolitano by a certain contingent of our student body I decided to probe the justification for such vehement opposition to her appointment. I approached the table of the group By Any Means Necessary (BAMN) in front of Moffitt Library to settle my curiosity. I asked one simple question and let them answer: Why are you attacking Napolitano for mass deportations, shouldn’t you be against Obama for the injustices against the undocumented? 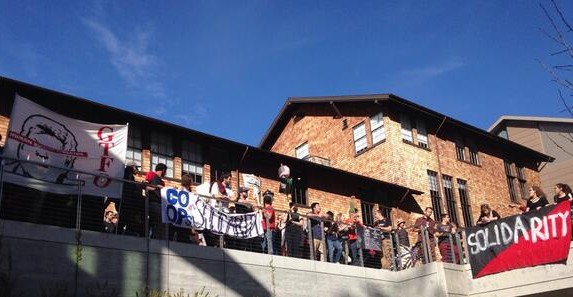 United in our use of acronyms.

The response from the disheveled white man tabling was not especially organized but I will do my best to explain it clearly. He asserted they could not attack Obama since he is our first black president and Napolitano alone is culpable for the injustices against the undocumented. He then equated the struggle of BAMN to the radical abolitionists of yesteryear because, in his opinion, obstructing constructive discourse with Napolitano is a radical gesture of resistance. Lastly, BAMN believes ousting Napolitano is worthy of an ASUC sponsored group because of social justice and nebulous “stuff” that he did not elaborate upon.

I view the Office of UC President as a purely administrative role and demand he or she keep our tuition under control, fundraise well, and keep the UC financially sound in order to let her campuses promote their own vision of higher education. Napolitano may be an apparatchik from the other side but her experience managing the Department of Homeland Security seems to comport with the function of overseeing the administration of a complex organization such as the University of California. This does not mean she will go around rounding up undocumented students. Although, the presence of undocumented students in the UC is both a quandary for legal California citizens denied admission to the university system tasked with serving them and immigration reform advocates. It is disconcerting legal residents are ostensibly denied access to the UC and the undocumented have no recourse to legally integrate into a society into which they have been socially incorporated.  The issue of immigration is far more complex than, perhaps, BAMN, in their call to remove Napolitano, wants to acknowledge. Ultimately, the appointment of Napolitano is a non-issue with respect to immigrant rights. I am just thankful the representatives of BAMN whom I talked to are focused on remedying such narrow historicism versus promoting causes where they can do more damage. Additionally, I am thankful they speak on behalf of people of color such as myself so I can focus on causes and activities that will secure me actual security and individual justice.