The Lackluster Shadow of the Free Speech Movement 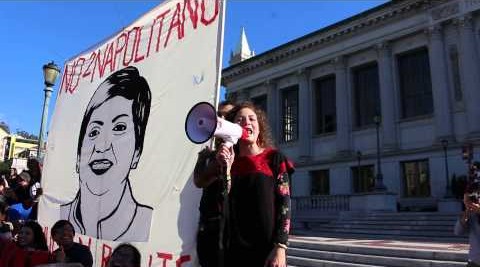 Look out, Andy Warhol. There’s a new maverick in town.

To quench my ever-lingering thirst for caffeine, I must come face to face with thousands of impassioned students, immortalized on the wall of the Free Speech Movement Cafe. The iconic Mario Savio is plastered left and right, championing freedom and setting a precedent for future budding activists. However, more than fifty years later, I sit here, sipping on my white chocolate mocha considering the state of affairs of the university today. How have we devolved from freedom of speech to effigies of Janet Napolitano and a giant faux Keystone Pipeline on Sproul?

When people find out I go to Berkeley they tend to ask a certain set of questions. Is everyone really liberal there? Have you been in any protests? I hear students rip pages out of textbooks so others can’t study? And other questions pertaining directly to prestige and/or the perceived crazy mindset of the general student population. To a seasoned Golden Bear, these questions are somewhat funny, but also reflective of an alarmingly antiquated view of our university. Yes, most students lean left, but they certainly aren’t mirroring the stereotypical campus crusaders of generations past. Then come the actual campus “crusaders”. Yes, they are loud, but so often I find myself thinking that that’s all they are. To me, there seems to be a lot of “crying wolf” going on. Put more bluntly: there’s no substance to the loud cheers that occasionally echo through Sproul.

Unfortunately, this trend is mimicked nationwide, left and right. The villainous Tea Party, with their boisterous leaders calling for a return to “family values” and condemnation of all things government are, perhaps, just a couple generations off of the Progressive Movement from the radical left. Of course, these polarizing groups are the minority. In the middle sit the vast majority, so how have they become so quiet? The Republican Party seems to, only recently, have tried to do some form of damage control to reign in the radical opinions and promote a more moderate, palatable politic. This is disturbing, not just for conservatives, but for liberals alike. If we, as a collective society allow caustic rhetoric about non-issues dictate our nation, we are posturing for an incredibly problematic future. This isn’t to say we should mute their voices. Indeed, some of the most important progress in our nation’s history has been made by the dissenters and the perceived “crazies.” When the radical dissenters lack substance, though, it’s time to stand up and take a new trajectory. Drum circles and cheers aren’t going to do the trick here either. People need to sit down, converse, compromise, and actually start making real strides in fixing the very real problems plaguing our nation. The problems aren’t going to solve themselves and the longer we stand by with crossed arms glaring at the other party and yelling loudly in the middle of streets the more dire our national situation will grow.

Looking back at our beloved campus, we see a number of legitimate causes. The University of California is hopelessly deep in debt, there are students rationing meals because their tuition and fees can’t possibly be covered by one job, and myriad other problems. Yet, what students remember are the protests where little papier mâché Napolitano’s decked out with devil horns are held up amidst drumming and chants to have her removed. Is this the legacy we want to leave at Berkeley? A generation of students who, when given the opportunity to voice their opinions, decide to walk out? I can just see the cafe in commemoration of us; the walls will be awfully blank.